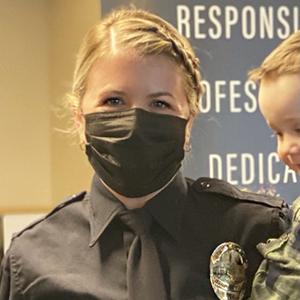 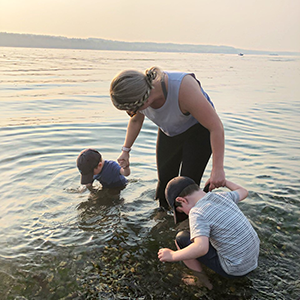 I began my career in Public Safety in 2010 when I was hired by Snohomish Co 911 as a Police Dispatcher. After four years I made the transition over to the Issaquah Police Department Dispatch Center where I have spent the next seven years. During my 11 years as a dispatcher, I developed a passion and commitment to public service that has ultimately led me to becoming a Police Officer.

The Issaquah Police Department is made up of dedicated men and women whose singular focus is serving their community and each other. When I was deciding which Department I wanted to work at I knew IPD would always be my home and first choice of places to work. I am continually inspired by my co-workers, and I am humbled and excited to work alongside them.

Outside of work, my life is mostly taken up by my two sons Benjamin and Charlie. We like to spend our days outside exploring the PNW, our absolute favorite place to be is the beach about half mile from our house. My boys are everything to me and my main priority is building a life that makes them proud.