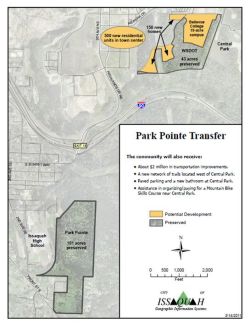 Thanks to a multiyear effort, more than 140 acres of forested land (PDF) in and around the City – including the entire Park Pointe area on Tiger Mountain – was preserved and protected from development on March 24, 2011.

Years ago, the City identified this once-in-a-lifetime opportunity to preserve Park Pointe, which is located on the base of Tiger Mountain near Issaquah High School. Such large-scale preservation fulfills numerous goals engrained in Issaquah's Comprehensive Plan.

Under the City-initiated WSDOT Development Agreement (PDF), new development will not be allowed at Park Pointe. Instead, development will be focused in and around Issaquah Highlands, Port Blakely Communities' master-planned community, through a transfer of development rights (TDR).

The plan includes several other components, including many new amenities and improvements for the community.

The community will also receive: